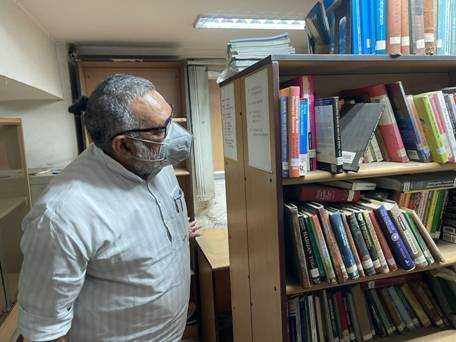 Under the leadership of Prime Minister Narendra Modi, as the country celebrates Azadi ka Amrit Mahotsav to commemorate India’s 75 years of independence, the focus is on keeping India clean during the month of October In progress. Taking on Swachhta & Seva’s mission to government offices, Union Minister of Rural Development and Panchayati Raj Giriraj Singh today inspected various sections of the Ministry of Rural Development and reviewed the physical and digital cleanliness practices followed at within the ministry. The minister asked officials to maximize the use of the electronic filing system for better office management.

During the inspection campaign, the Minister stressed the importance of the physical and digital cleanliness of the system and the premises to improve the working environment, efficiency and employee health. The Union Minister also said that under the leadership of Prime Minister Narendra Modi, the Indian government places the highest priority on cleanliness.

The Union Minister suggested that the office maximizes the use of technology and the internet and aims to achieve paperless operation while accelerating the digitization of archives and records in a fast and secure manner. He also suggested that large obsolete machines such as copiers, older furniture, air conditioners, etc. are discarded and auctioned in the public domain in a formal and transparent manner.

Giriraj Singh explained that in the age of digitization, the digital sanctity of databases is important for faster data recovery. It also placed emphasis on periodic maintenance and cleaning up unnecessary data. Important files relating to Parliament, Cabinet, RTI, grievances, etc. should be organized in a central repository for efficient information sharing between departments. He also suggested digitizing the books available at the department library.