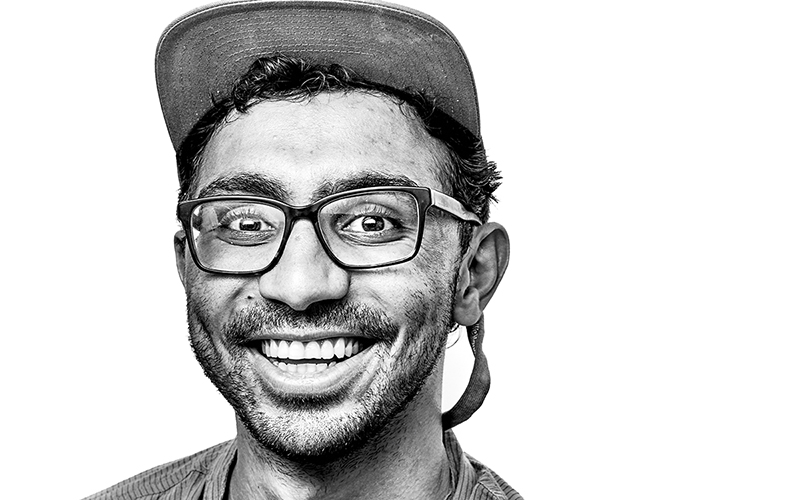 Vasu Sojitra does not want to be treated differently for what he has achieved.

At the age of 30, he climbed and skied the face of Denali’s Skillet Glacier and Mount Moran, scaled the Grand Teton, was hailed by Tony Hawk for his skateboarding skills, and earned brand endorsements. elite like the North Face and Faction skis. .

He did it all on one leg. When Sojitra was nine months old, her right leg was amputated just below her hip due to a severe blood infection. Since then, he has used crutches, or “ninja sticks” as he likes to call them, for balancing, sculpting, hiking and skating.

“Adapted athletes are athletes,” says Sojitra. “I push my body as hard as the next athlete, fit or unfit. These categories are a great way to provide some representation for the next generation, but we should also be seen as athletes.

“I push my body as hard as the next athlete, fit or unfit. These categories are a great way to provide some representation for the next generation, but we should also be seen as athletes.

Sojitra shares how he fell in love with the outdoors on Zoom from his home in Bozeman, Montana. He describes how, growing up in Connecticut, he experienced “brown joy” watching various TV shows like rocket power and Johnny Tsunami, where he saw other kids of color doing extreme sports. This meant following his adventurous and encouraging older brother, Amir, who introduced him to skiing and skateboarding when he was 10 years old. He remembers sitting in front of the television watching X Games, where sports like skateboarding entered the mainstream and were immediately drawn to it.

“We found the cheapest gear possible and convinced our Indian parents to drive us to go skiing,” says Sojitra. But it hasn’t been easy. He says it took him about a decade to master the sport and have custom-made equipment made for him so he could ski on one leg. It uses specialized ski bindings and stabilizers, forearm crutches with small skis on the bottom. While at the University of Vermont, his friends, eager to take Sojitra to the backcountry, came up with the idea of ​​using snowshoe baskets, which he still uses to ski today. steep slopes.

Watching Sojitra ski is deeply impressive, not because of his disability, but because he’s a tremendous athlete. Period. To reach the top of the bowls, he performs the equivalent of hundreds of arm dips, often dragging equipment behind him. At the top, he tackles impossibly thin and narrow lines, making nimble and graceful turns, the powder sliding off the backs of his skis.

His motto is “ninja who walks through the woods to bring intersectionality to the outdoors”, a phrase first coined by his friend Mike Gardner, who guided him to Grand Teton in 2014. Gardner watched Vasu stepping on a precarious ledge, only about two feet wide, with a crutch on either side of a 2,000-meter cliff, and exclaimed, “Damn it, man! You’re a ninja climbing that mountain!”

“The sentence is kind of stuck,” comments Sojitra. “I realized it brought a levity to the more sensitive and uncomfortable topics around medical equipment and disabilities. Every time I tell kids these are my ninja sticks, they light up and want to use them.

As Sojitra continued to improve his skiing, tackling bigger mountains and more technical descents, it was the community that made the mountains feel like home. He recently returned from a road trip that took him from Jackson Hole, Wyoming, to Park City, Utah, and Telluride, Colorado. He and his friends bombed a line of steep powder off Cody Peak one day and spent the day skiing in Park City National Aptitude Center the following. The center offers an extensive adaptive sports program that includes everything from horseback riding to mountain biking to skiing.

“They have a ton of programs for people with all kinds of disabilities, including veterans. It was cool to connect with them, take lessons and see people progress and love skiing as much as I do,” says Sojitra.

But as he met other adaptation athletes, he wondered why they weren’t represented in professional spheres. In response, he co-founded the Inclusive Outdoors project with mountaineer and DEI strategist Sophia Bielsky, which promotes the inclusion and representation of BIPOC, people with disabilities and LGBTQ communities in mountain activities. The idea is to break down barriers to accessing outdoor spaces and make people feel safe and cared for. Sojitra uses this platform to work to disrupt the status quo, amplify often ignored voices and break with the often homogeneous and exclusive nature of outdoor culture.

One of the ways he has been able to share his story and find his voice is through social media. His Instagram posts, shared with more than 52,400 followers, showcase impressive technical descents and ascents, coupled with essays on redefining access, exposing ableism, and connecting justice movements to people with disabilities and social justice.

In describing her outdoor adventure experiences, Sojitra emphasizes that while our differences make us unique, we shouldn’t focus on them. It’s our similarities that bring people together, and tackling outdoor ableism means bridging the gap between communities – adaptive and non-adaptive, white and people of color. For him, it’s about meeting people where they are and redefining what access means.

“I think access is more of a mindset than anything else. It’s how we communicate our body language. It is our presence. It’s about knowing when to support and care for someone, knowing when to ask the right questions, knowing what physical help people need, it all comes together. This is not an accessible ramp or accessible parking; it’s everything in between,” says Sojitra.

His mission is to expand the narrative around what it means to be a disabled person of color on the outside, to show joy and confidence in being in your own skin, and to be a mentor to other people. who do not yet see themselves represented in the media. As much as Sojitra challenges himself, he challenges others to rethink how we can create a more inclusive world and reach greater heights.