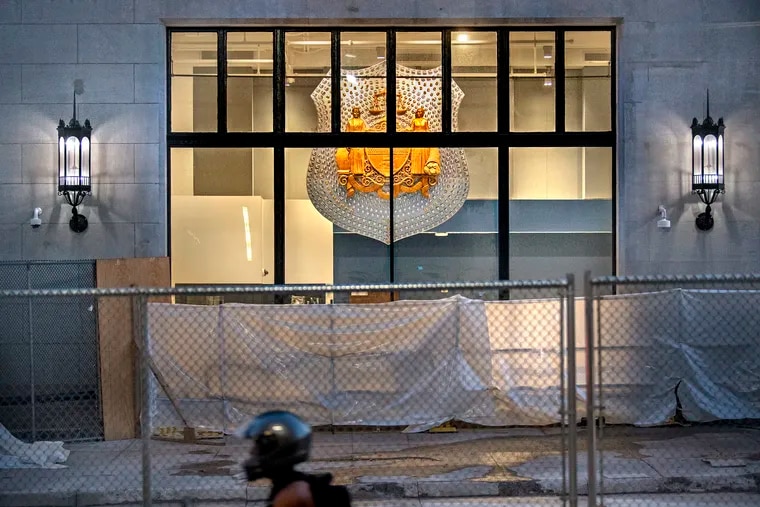 This week was the anniversary (the number falls somewhere between coral and ruby â€‹â€‹on the gift list) of my walking into the alabaster tower on North Broad Street, passing under the blue glass globe in the lobby, and taking the elevator to the fifth floor newsroom on my first day as an Inquirer staff photographer.

Coincidentally, this week is also the ninth anniversary of the newspaper leaving that home of 87 years to move into offices on the third floor of the former Strawbridge & Clothier department store at 8th and Market Streets. The previous home in the eighteen-story Beaux-Arts style skyscraper is under renovations to become the new headquarters of the Philadelphia Police Department.

So, I’m doing some looking back.

That week I also received a Domke camera bag (known just a few years earlier as the Philadelphia Inquirer Bag) with two Nikon F-3 cameras, a 24mm, 85mm, 180mm and 300mm lens, and a Vivitar 283 flash unit. And a â€œbrickâ€ of 20 rolls of 36 exposure 35mm Kodak Tri-X black and white film. The negatives would be developed in a high volume Kodak industrial film processor, and printed by us in a large communal darkroom (fondly remembered by all who worked and conducted long conversations in them).

Along the way I also exposed rolls of 35mm Kodachrome 64 when doing color photo essays for our Sunday Magazine, and in the mid-90s, when the newspaper built a new printing plant with color presses (since sold), we switched to color negative film that was scanned and converted to digital files.

In my final trifecta of coincidences, this week also saw me stepping into the 21st century, camera-wise by watching YouTube tutorials for the brand new Nikon Z6 mirrorless cameras I just received. (Sorry no unboxing videos. Keep moving, nothing to see here .)

The Nikon F3s served me for almost 20 years. They were later replaced by Nikon F4s and just before I switched to digital DSLRs (around the time of the 2000 GOP National Convention in Philadelphia), I added a Nikon F100, which is still my all-time favorite 35mm film camera.

This got me thinking of how – like everything else in newspapers – has changed over the years I’ve been taking pictures. In high school, I used a medium format 2-1 / 4 TLR Yashica Mat-124G (for the yearbook) and a Asahi Pentax Spotmatic 35mm SLR (for sports in the school paper). By the time I was working at my first real newspaper, I was using a Nikkormat FTn. The older photographers there had made the transition from 4×5 Speed â€‹â€‹Graphics – like Arthur â€œWeegeeâ€ Fellig used in New York in the 30s and ’40s. So while I never used one on assignment, I did learn from them how to load and develop the individual sheet film holders (and later, working on the Inquirer Magazine, I did use one a few times in the studio for cover photos).

Coming full circle, a few months ago during a photo department staff Zoom meeting, we learned that most of our younger photographers had little to no experience with analog film photography. Or cameras without light meters. Or ones that required eye-hand coordination to focus.

So Danese Kenon, our Managing Editor for Visuals, started a staff project to have each of us take turns shooting for one week, with the same 35mm mechanical camera with manual exposure and focus (a Nikon FM, belonging to our Deputy Director Frank Wiese) using just one roll of B&W film and one lens (50mm f / 1.8).

We expect to have a story when our analog adventure comes to an end. I will link to it in this space when that happens, but here is a quick peak at the first two frames I made. I have driven by – and marveled at – a large tree for years that went down in a storm and was never removed. On my first day with the B&W camera I had an assignment nearby, so this time as I drove by, I stopped. I looked at the texture of the tree, it’s sun-bleached limbs, and thought about how I’d never stopped before because to take a picture for the newspaper it would need people in it. But that never happened.

So I took two photos with the film camera. With my regular DSLR I might take a few pictures from one angle, move or change lenses, look at the preview screen, try a difference composition. But using film forces you to be more deliberate. Just the two frames: one close up, and one looser.

Afterwards, sitting in my car, I looked up and saw a family walking up to the tree, and suddenly they started climbing on it. Call it serendipity. Or the photo gods looking down and smiling on the practitioner of an almost obsolete craft. But, mixing metaphors here, I was able to have my analog â€œcakeâ€ and a digital moment. And eat it too, with a nice moment or two for the newspaper.

Since 1998, a black-and-white photo has appeared every Monday in staff photographer Tom Gralish’s â€œScene Through the Lensâ€ photo column in The Inquirer’s local news section. Here are the most recent, in color: