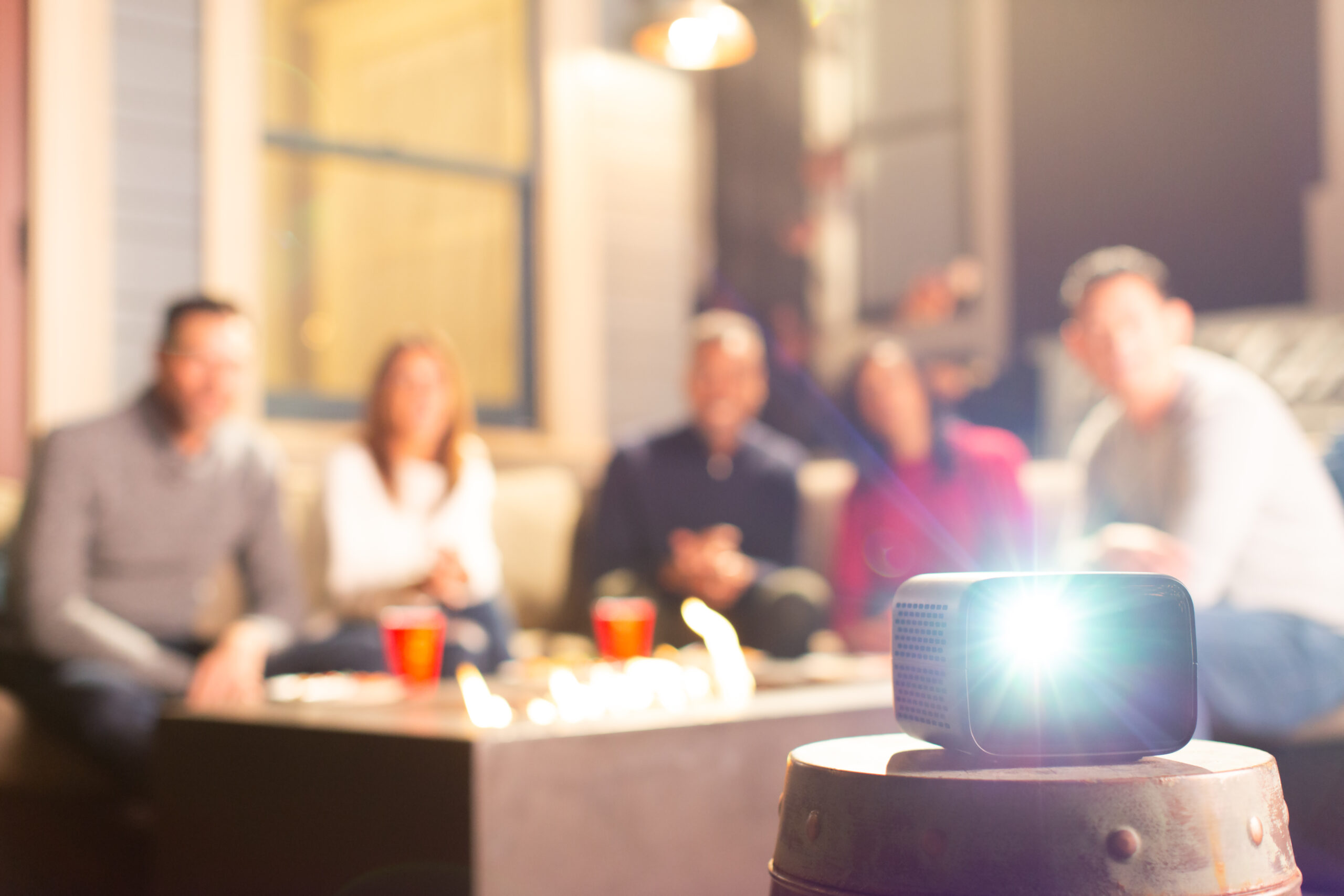 A pint-sized projector with the power of Android TV, the Philips PicoPix Max TV pico projector produces a big picture on the go.

As their name suggests, pico projectors are considerably smaller, lighter and more portable than traditional full-size home theater projectors. There’s an understandable trade-off in terms of image quality, but you might not mind if you value convenience more.

Of course, a projector is only part of the solution on movie night, you also need something to watch and a way to listen to the audio. Traditionally, this meant plugging a record player or other playback device into your projector, along with an external amp and speakers.

The Philips PicoPix Max TV makes your life easier with built-in stereo speakers, as well as the built-in Android TV offering easy access to all your favorite streaming services. There’s even a built-in battery, making this an all-in-one entertainment package for the living room, bedroom, playroom or even the garden after dark.

If you’re unfamiliar with pico projectors, you might be surprised at how small the Philips PicoPix Max TV Projector is. With a footprint of 15×15cm and a height of 12cm, it’s about the size of a stack of eight Blu-ray disc cases. Weighing in at 2kg, it’s light enough to slip into a carry bag so you have a movie on the go.

On the front you’ll find a lens with a sliding protective cover, while on the back you’ll find HDMI and USB-C for content playback. You can plug in just about anything that can spit out a picture, like a disc player, set-top box, computer, or game console. There’s also a USB-A port for playing video files from a thumb drive, plus a button for syncing with Bluetooth devices so you can use the projector as a Bluetooth speaker.

At the top of the projector are touch buttons for accessing the projector’s on-screen menus. The projector also comes with a TV-style smart remote to make the most of the Android TV Smart TV interface, with dedicated buttons for Netflix, Amazon Prime Video and Google Assistant.

To take advantage of all these internet features, the projector has built-in Wi-Fi, which also allows the projector to act as a Chromecast streaming point to stream audio and video from your devices. . Android TV’s sleek user interface and extensive app library provide a great user experience.

Which brings us to the potential dealbreaker, the projector only offers 1080p resolution. While that’s sharp enough to do justice to DVDs, Blu-rays, and TV, it’s not sharp enough to get the most out of the original Ultra HD content found on most streaming services. The projector will automatically upscale this content to 1080p, with support for HDR10 High Dynamic Range but no Dolby Vision. All of this will frustrate people who are picky about image quality.

Turn on the Philips PicoPix Max TV and you’ll notice the lens projects straight forward, so the bottom of the image is level with the projector. That means you’ll probably need to sit the projector on something tall, like a table or stool, so the image fits nicely on your projection surface.

Flip the projector over and you’ll find a mounting thread on the bottom, which offers the option of securely attaching the device to a stand.

Unlike some projectors, there are no built-in feet that allow you to tilt the unit up so it projects the image higher. As a workaround, you can always slide a book or a few DVD cases under the front to wedge it.

At this point, autofocus and projector distortion correction are helpful. There is no need to fiddle with a focus knob. The projector also uses automatic vertical keystone correction to straighten the image, and you can dive into the menus to access 4-corner correction. This can come at the expense of resolution, it’s best to have the projector as square to the wall as possible.

If you want a bigger image, just move the projector away from the screen, although this comes at the expense of brightness. Philips quotes a maximum picture size of 305cm, but you might consider that rather optimistic if you don’t want it to look too washed out.

Adding to its versatility, the projector has a built-in battery, which comes in handy if you’re hosting an outdoor movie night. Philips quotes a four-hour battery life but, at full brightness in Presentation mode, it’s closer to two hours – which should be fine for a movie but won’t let you go through dual functionality.

Of course, you also need to be able to listen to your movie, and that’s where those built-in stereo speakers come in handy. Mounting the projector high also helps sound transmission. The projector’s fan isn’t overwhelming, but it’s still loud enough that you’ll notice it in quiet scenes. You wouldn’t want to be sitting right next to the projector all night.

The Philips PicoPix Max TV pico projector is naturally not going to compete with a high-end home cinema projector. You’re trading quality for convenience, which might be fair trade if image quality isn’t your top priority.

While brightness varies with distance from the screen, the biggest frustration for detail-oriented viewers is that the contrast isn’t high enough to deliver a truly stunning, lifelike picture with deep blacks and plenty of details in the shadows. As the image becomes larger and the brightness decreases, the contrast also suffers.

When it comes to brightness, there are four modes to choose from: Presentation, Normal, Power Saving, and Super Eco. You’ll want to stick with Presentation Mode to get a decent picture.

On a cloudy day with some light coming in from the living room windows, you probably wouldn’t get past a 4 foot picture before the picture looked too dark and washed out. Draw the curtains and you can go up to about 1.75 meters.

It’s watching a TV show, like Brooklyn nine-nine, where image quality is not so important. Switch to a movie like Dunes and you’ll want to move the projector a bit closer to the screen, narrowing the image for a brighter image with better contrast. Especially if you are watching a movie with lots of dark scenes.

Likewise, the built-in stereo speakers provide decent sound when watching a dialogue-heavy TV show with occasional music. It’s strong enough to fill a decent sized room and even carry it around the garden. Throw in an action move and it’ll get a little murky with lots of explosions and a frenetic action soundtrack.

After dark, you can of course go even further with the image. In front of the television, one can be satisfied with the quality of a giant image of 3 meters, but the contrast is barely enough to lose a lot of detail on the faces of certain actors. You’d probably back off a bit for image quality reasons. When watching a movie, you’re more likely to scale the image size to around 2.25 meters, if not smaller, before you’re happy with the picture.

Keep in mind that all of this assumes you’re projecting onto a projection screen. A cheap 2 meter screen will cost you at least $100, but you’ll pay a lot more for a 3 meter screen. Given the portability of the projector, you can forgo a proper screen and settle for any flat, whitish surface. This may allow you to go further, but it will have even more impact on image quality.

All of this also assumes you’re entertaining adults who care at least a little about sound and picture quality. The projector will be a bigger hit with kids who are more impressed with image size than image quality. Image quality issues also become less pronounced when watching animated content.

The Philips PicoPix Max TV pico projector has a lot to offer. Its Achilles heel is brightness/contrast and resolution, but to dismiss it on those concerns is to miss the point. Pico projects aren’t about amazing sound and picture quality, but about the fun entertainment possibilities a small, portable projector offers – like movie nights and backyard movies. The inclusion of Android TV takes this flexibility to the next level.

Would I buy it?

Maybe, if I could see beyond picture quality and just enjoy a great picture anywhere, anytime.

Easily following you around the house or even outside, the Philips PicoPix Max TV pico projector could be your ultimate movie night.