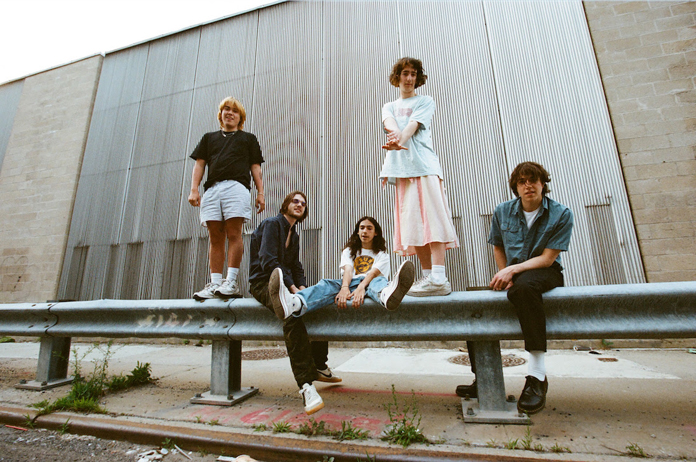 Brooklyn Geese’s all-new post-punk five-piece has announced their debut album, Projector, and shared a new song, “Low Era”, via a video for the single. Projector releases on October 29 via Partisan / Play It Again Sam (with a physical release on December 3). Check out the â€œLow Eraâ€ video made by Fons Schiedon below, followed by the tracklist and album art.

Projector includes the band’s auspicious debut single, â€œDisco,â€ which was released in June and was # 2 on our Song of the Week list and was acclaimed by other outlets as well.

The members of Geese recently graduated from high school. The group wrote, produced and recorded Projector during their junior and senior years of high school in their home studio (which they call The Nest). Vocalist Cameron Winter wrote each song, which was later fleshed out by guitarist Gus Green, guitarist Foster Hudson, bassist Dom DiGesu and drummer Max Bassin. Each song had to be recorded between the end of the school day and 10 p.m., by which time they began to receive noise complaints from neighbors. Dan Carey (Squid, black midi, Fontaines DC) then mixed Projector.

The band collectively said this about ‘Low Era’ in a press release: â€œWe tried to make everything sound super heavy and scary and complicated, really because that’s all we knew how to do. Ground foursome songs like ‘Low Era’ felt a bit like poison to us for a while, until we consciously tried to challenge ourselves to write something more dancey. Once we stopped applying certain limits, it ended up working unexpectedly, and even ushered in that psychedelic 3D element that ends up appearing throughout the album. We like the idea of â€‹â€‹confusing the listener a bit and trying to make each song a counterattack to the last, oscillating between catchy and complicated, fast and slow. â€œLow Eraâ€ is one end of that spectrum and ultimately broadened the scope of the songs we thought we could create. “

Geese will be performing at select festivals this year, including Shaky Knees and Desert Daze, as well as headlining Elsewhere (Zone 1) in Brooklyn on August 27.

Support Under the radar on Patreon.

Can I use an indoor set to watch outdoors? | Tech Radar