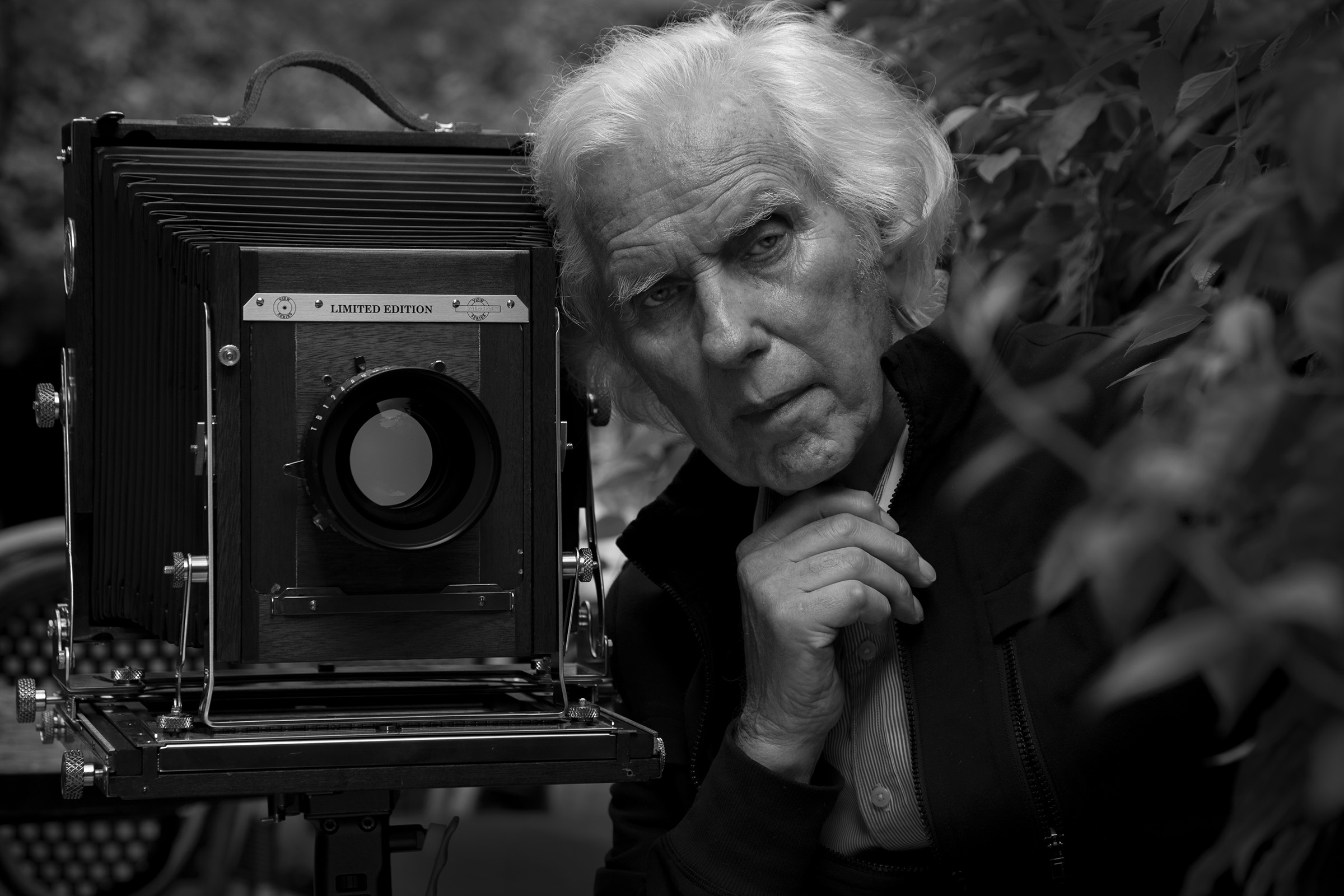 Douglas Kirkland was born in Canada and lives in the Hollywood Hills with his wife and business partner, Francoise. He is a legendary photographer, with a long and illustrious career spanning over six decades.

He joined See Magazine in his early twenties, followed by Life Magazine during the 60s/70s shooting photojournalism. It was the See a magazine report on Marilyn Monroe (a year before her death) is the best known. It captured the famed inclusive of Hollywood’s elite; Elizabeth Taylor, Marlene Dietrich, Jack Nicholson, Michael Jackson, Andy Warhol and Audrey Hepburn to name a few.

Over the years, Douglas Kirkland has worked on the sets for over a hundred films. He is represented in the finest art collections and archives in the world: the Academy of Motion Picture Arts and Sciences; The Smithsonian Institution; The National Portrait Gallery in Canberra, Australia; The National Portrait Gallery in London; The Eastman House in Rochester; The Houston Photography Center; the Annenberg Space for Photography in Los Angeles; and a retrospective exhibition of his work was held at the Triennale Museum in Milan, Italy.

Awards include: A Lifetime Achievement Award from the American (SOC); a Lucie Awards for Outstanding Achievement in Entertainment Photography from the IPA (2003); The Golden Eye of Russia (2009); The American Society of Cinematographers ASC awarded him the prestigious President’s Award (2011); the Nastri D’Argento (Silver Ribbon) at the Taormina International Film Festival; the Consul General of Canada Los Angeles Achievement Award in Recognition of Outstanding Lifetime Achievement (2017); and the CAFAs (Canadian Arts and Fashion Awards) presented her with an award for outstanding achievement for her career in photography (2019).

Kirkland recently embarked on a photoshoot in the time of the Pandemic with the challenges of travel and working with an 8×10 camera, shooting in analog (shooting film). This is his story…

Hollywood Hills to Denver and back!

“Shooting with the 8×10: you are always on the verge of failure” Douglas Kirkland, September 2020

Patricia Lanza: How did this idea for a photo shoot come about?

Douglas Kirkland: I have worked with the 8×10 camera for most of my career. I started using it in Virginia in a commercial studio and then in the Sherwin Greenberg studio in Buffalo New York photographing product still lifes. Later, I was impressed with how Irving Penn created a different look in his studio, breathing life into still life photography. The See The Photo Magazine department had a Deardorff 8×10 camera that I took on the road with my 35mm and my Hasselblad. I experimented with the photography of stars like Catherine Deneuve and Dominique Sanda for a different look. When See Magazine went bankrupt, cinematographer Arthur Rothstein offered me the camera and 16 mounts for $100.00. It was a wonderful gift and the camera has been with me ever since.

“The Old Lady”, the camera that Luhrmann and I named and christened, spent 7 weeks in the bush on Baz Luhrmann’s film Australia, making portraits of Nicole Kidman, Hugh Jackman and Aboriginal actors. She came to Italy to work with Monica Bellucci and other Italian stars.

She was with us on the set of The Great Gatsby to record timeless images of Leonardo DiCaprio, Toby Maguire, Carey Mulligan and other crew members. Some of these images hang in the Plaza’s Gatsby Suite designed by award-winning designer Catherine Martin, wife of Baz Luhrmann. This camera has been my faithful friend for the past six decades.

One morning during the altered reality of our life with the Covid virus, I woke up with a new project in mind: I wanted to photograph Don Isidro Garcia who is 106 years old. It was a spontaneous thought. I always think of new projects and ideas. My life is tied to a visual world and as I get older the importance of my visual world is even more intense. Photography is in my blood and I feel the need to take pictures.

Patricia Lanza: Who is Don Isidro Garcia and why did you choose this subject to photograph now?

Douglas Kirkland: Don Isidro Garcia is the father of my daughter-in-law Letty Kirkland, the wife of my son Mark. I had photographed it 10 years before in Los Angeles with the 8×10 camera. He was then in his mid-90s. I was impressed by his intensity and his energy. He and his wife started dancing in our living room, they were connected and wonderful to watch. I congratulated him on his 100th birthday and sent him a pink tie because he is a very dapper gentleman. I always wanted to do another portrait of him. Why now? I guess it was random. Maybe I had more time because of the lockdown to think about what I wanted to do next!

Patricia Lanza: In this pandemic time, how did you form the production since the subject was living in another state

Francoise Kirkland: I tried to explain to Douglas that it wasn’t something we could do easily since our subject Don Isidro lives in Denver but he was very adamant and wanted to find a way. It was our friend, photographer Dana Fineman who really made it all possible!
We have known Dana for 40 years. She helped Douglas and he mentored her. I worked a lot with her when I ran the West Coast office of the French agency Sygma. He is a great talent, fearless and full of enthusiasm. When the pandemic started, we thought it would be more interesting to quarantine with her and the border doodle Sonny Boy. We have created our own little bubble and we are having a lot of fun.

When I told him about Douglas’s idea and the seeming impossibility of accomplishing this security, his response was, “Of course we can do it, we rent an RV.” I pointed out that I personally had never driven an RV or traveled in one, but she was confident this was going to work We were all ready for an adventure and began intensive planning, making endless lists, looking maps, browsing the most beautiful National Parks, finding places to stop along the way. We took our Nespresso machine on the road and a bucket of fresh herbs in little jars. I made ratatouille and some quiches to freeze. We had a fridge stocked with everything you could want from homemade burrata salsa, French cheeses, steaks and stuff to make Smoore’s. Douglas was obsessed with photographing the sky and clouds with his digital camera on the go and Dana gave him the nickname “Chief Shooting Cloud”. We hit the road in early August and celebrated Douglas’ 86th birthday on the road. He really couldn’t do better than that! And our friend Jean François Leroy says “Better is unbearable”!
Patricia Lanza: Tell us about your background and the subject?

Douglas Kirkland: The trip was an incredible adventure through some of the most beautiful parts of this country like Zion Park and Sante Fe. But what made it special was that we had a mission. We enjoyed and enjoyed the trip all the more because we had a clear goal.

Patricia Lanza: Discuss the technical aspects, your choice to shoot with an 8×10 camera and film?

Douglas Kirkland: When taking photos with the 8×10 camera, you are always on the verge of failure.

The beauty of 8×10 is that it allows time for reflection. You have to be very deliberate.

The look in people’s eyes can be haunting as they have to sit still for a while. It’s the opposite of how photography is now. I’m happy to shoot with the latest digital cameras but there’s a romance between 8×10 and film: the time spent composing and focusing, the simplicity and complexity of the camera photo, my 15 year old nephew was fascinated by it and asked where the battery was, then the trips to the lab, the great transparency. Michael Rand, the legendary editor of the London Sunday time used to talk about the seduction of large format on a light table. This camera reflects the times we live in right now.

Patricia Lanza: What’s in store for the future?

Coco Chanel and MM are at the Finnish Museum of Photography

Françoise and I are working on a book idea. Women have been the engine of my life and I would like to create a volume of images in tribute to the feminine

Photography was the ideal companion with Françoise. I was very lucky to have found my dream. What’s amazing is that I never imagined that my dream could take me this far. David Cohen likes to say that I dreamed my life and lived it.