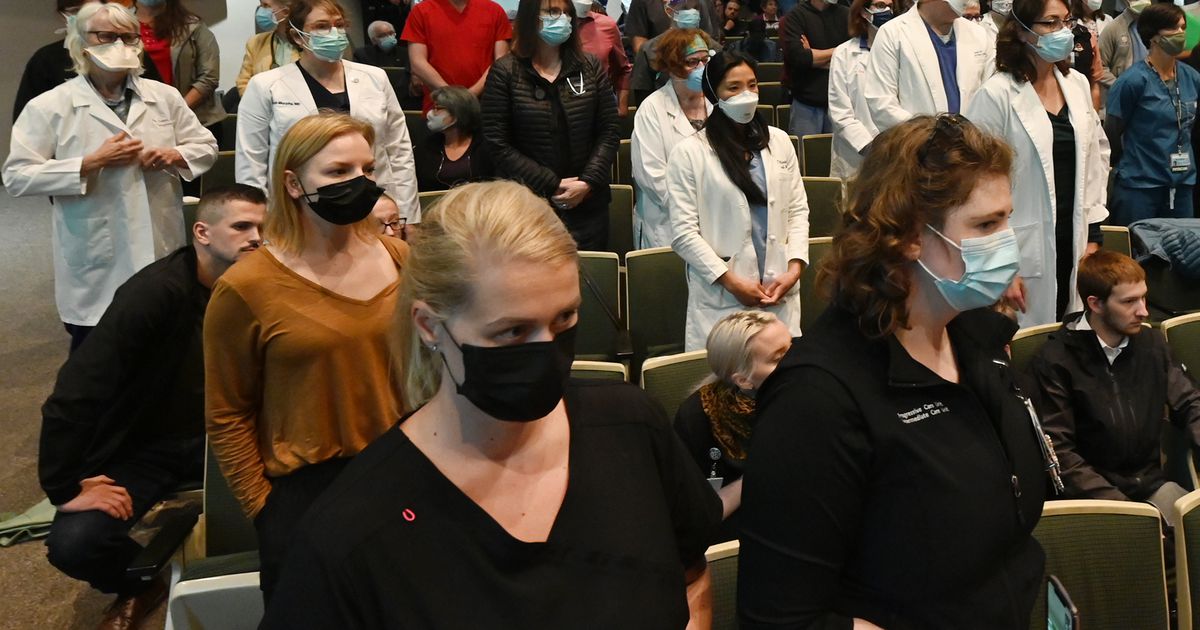 Defamation of healthcare professionals has no place in Anchorage

At the Anchorage Assembly meeting last week, a group of doctors and nurses testified about the current COVID-19 crisis in hospitals in our city and advocated for the local government to take action. to protect public health. Their testimony, while powerful, was not unique in itself; Healthcare professionals have advocated for the same measures – such as masks, immunizations and social distancing – that public health officials around the world have been recommending for many months.

The reaction to the testimony, however, was remarkable. Members of the audience openly booed and taunted. Assembly member Jamie Allard has repeatedly asked doctors and nurses if they refuse ‘alternative’ treatments to their COVID-19 patients, allowing patients to suffer or die needlessly in order to ‘promote the vaccine’ . The next day, Alaska’s most widely read conservative blog posted an article titled “Medical Theater: Doctors, Nurses Coordinate with Liberal Assembly to Bully Community Over Vaccines.” Readers have left dozens of comments accusing medical professionals of lying, refusing effective medical treatment, and deliberately injuring or killing their patients.

We believe Tuesday’s events represent a deeply disturbing new phase in the COVID-19 pandemic in Anchorage. Our local medical providers have worked tirelessly and risked their lives to care for those affected by COVID-19. They reported for work during the early stages of the pandemic, despite a lack of personal protective equipment and serious unknowns, and they were among the first to volunteer for the vaccination. They are now working overtime to contain a huge wave of largely preventable hospitalizations and COVID-19 deaths while battling severe stress and burnout. The movement to demonize medical workers at this critical time is appalling and wrong, and the insinuation that medical providers are deliberately killing their patients or denying any proven treatment – to a sitting member of the Assembly, nothing less – is odious.

In some ways, what we witnessed on Tuesday is the inevitable by-product of months of creeping conspiracy theories and disinformation about COVID-19 being spread by individuals, media and politicians. Conspiracy theorists have wrongly claimed that COVID-19 is not harmful, that it can easily be cured with existing drugs, and that COVID-19 vaccines cause serious damage. Some mistakenly claim that COVID-19 doesn’t even exist, or that the pandemic was never real in the first place. During the election campaign, Anchorage Mayor Dave Bronson said he was not sure â€œif there had been a pandemicâ€ in Anchorage.

Make no mistake: the idea that nearly every government in the world, along with tens of millions of doctors, researchers, and other medical workers, are colluding in a murderous conspiracy that has no apparent purpose is a mass illusion. But in the face of the reality of Anchorage hospitals overflowing with COVID-19 patients and appeals from local medical providers, those who indulge in this illusion have chosen not to question their own beliefs, but rather to make medical providers. Anchorage – our friends, neighbors and family members – the villains of a dangerous fantasy.

This demonization of medical workers has real world consequences. It discourages people from seeking necessary care until it is too late. It also reduces the likelihood of people getting the COVID-19 vaccine, which extensive research shows is extremely safe and effective. In addition, turning people against local medical workers has consequences for the workers themselves. The Ebola outbreak 2018-19 in Congo provides a concrete example of what can happen when uncontrolled conspiracy theories convince people that deadly diseases are not real and that medical providers are the enemy.

From 2018, rumors spread across the Congo region that deaths from a major Ebola outbreak were not due to the virus but to deadly aid workers. In several cases, armed militiamen stormed medical facilities and medical personnel killed, including Dr Richard Kiboung, WHO health worker. According to Patrick Tsiko, the deputy mayor of Butembo, DRC, “these militiamen wanted all expatriates to return home because, according to them, Ebola does not exist in Butembo”. In other cases, medical workers have been kidnapped and tortured, and medical equipment has been set on fire. Attacks on medical personnel and destruction of equipment severely affected the ability of the medical community to respond to the Ebola outbreak, which devastated local communities and ultimately left thousands dead.

While it seems unlikely that overt violence will happen here, a vocal minority in Anchorage is already engaging in disturbing rhetoric against medical providers. Readers of the aforementioned popular conservative blog have shared dozens of public comments claiming local doctors and nurses are breaking their Hippocratic Oaths, ignoring “cures” for COVID and killing patients. One comment read: “Give people the drugs that we know to work and stop letting people die.” You are murderers. Another read: â€œHospitals have become K1ll zones because they refuse to use the right drugs and save people. One of them said that “people are worth more dead than alive … follow the $$$”. Another bluntly said, “Keep it up and you become the enemy!” One asked for the names of the doctors and nurses who testified at the assembly meeting.

Make no mistake: this is the type of language that justifies and precedes violence. And it has no place in our community. It is impossible to know if every commentator really believes what he writes, but we have no interest in finding out. This is not a path our community should take.

We urge everyone in Anchorage to support our local medical workers as they go through what is, in most cases, the most difficult time of their professional careers. Medical workers are not above criticism, but when they work around the clock following highly validated medical practices to save lives during a pandemic, they deserve our sincere support. The healthcare providers we know personally are compassionate and hardworking, and when they publicly admit that they are having a hard time managing their workload, we believe them. We also urge politicians, media and individuals to stop spreading false information about COVID-19 and to stop the reprehensible defamation of members of the Anchorage medical community. After all, statistics suggest that those who engage in COVID-19 conspiracy theories and demonize medical workers will be the most likely to need their help.

Paxson Woelber is an Anchorage multimedia expert who has worked on more than two dozen Republican political campaigns. He owns two Anchorage businesses and is the editor of special articles for the Alaska Landmine.

Dr Daniel Volland is a licensed eye doctor and small business owner in Anchorage. He is currently vice-chairman of the South Addition Community Council.

The opinions expressed here are those of the author and are not necessarily endorsed by Anchorage Daily News, which welcomes a wide range of views. To submit an article for review, send an email comment (at) adn.com. Send submissions under 200 words to letters@adn.com Where click here to submit via any web browser. Read our full guidelines for letters and comments here.