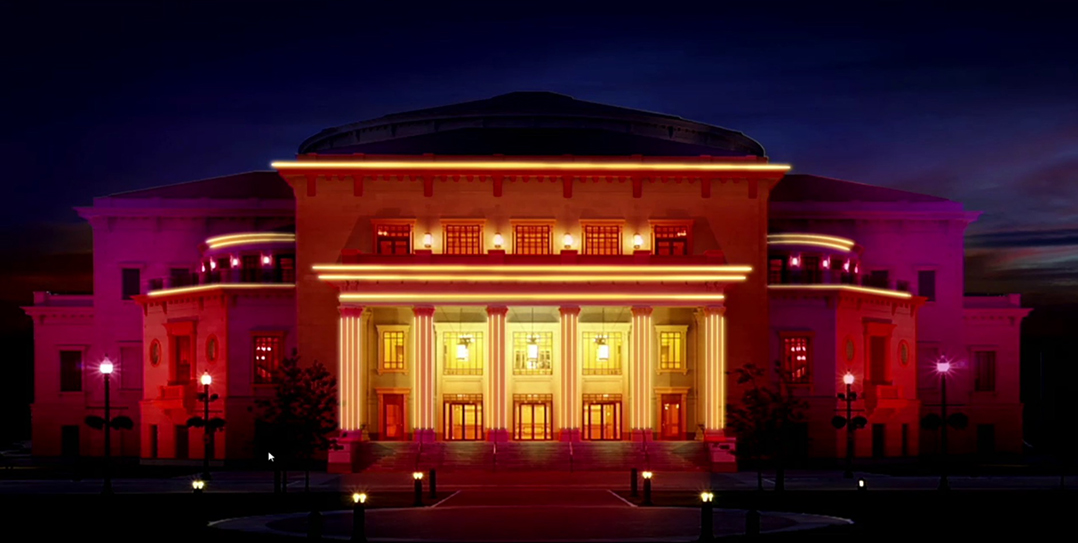 The Palladium is set to become the backdrop for a light show aimed at boosting tourism in Carmel.

In August, the Carmel Redevelopment Commission unanimously approved up to $2.2 million to purchase and install 12 rooftop projectors on the James and Tarkington Buildings south of the Palladium for the hour-long show, which will begin every day at dusk. Installation will take place in the coming months and the show is expected to debut in mid-2023.

Between the two buildings is Carter Green, an urban park where residents and guests of Carmel can watch the show from the south side of the Palladium. The floodlights will be installed high enough that Carter Green events, such as the annual Christkindlmarkt with its 33-foot-tall Glühwein pyramid, will not interfere with the light show.

The purchase and installation of the projectors from Bloomington-based Blockhouse Studios is funded by CRC’s Urban Parks Fund, which contains tax-raised funding dollars generated by CRC projects. Residential property tax funds will not be used for the project.

Last year, the city council approved $1.5 million in bond funds — which can now be allocated by the council for another use — for a light show on the Midtown Water Tower and the Tower of adjacent 911 communication, but as CRC worked with industry consultants on the project, realized that Palladium would be a better fit.

“There was this moment of eureka where the professionals said to themselves: ‘Why are we talking about the water tower? You have the most amazing canvas (on the Palladium) in this town for a projection show that we have ever seen,” CRC Director Henry Mestetsky said at the August meeting.

Mestetsky said Blockhouse Studios will “perfectly map every detail” of the Palladium down to the millimeter to fine-tune the projection of light shows to suit the building. Shows will not be projected onto windows or other areas where light may enter the building, meaning the show will not be visible inside the Palladium or disrupt programming inside.

The light show, which will be hooked up to Carter Green’s sound system, is expected to continuously illuminate the Palladium in the backdrop most of the time, but take center stage for a few minutes every hour.

Limited edition shows by national artists or seasonal shows could also be added.

Annual maintenance costs for the light show are expected to be between $8,000 and $10,000, with electricity expected to cost $2,600 per year. The cost of developing a light show program ranges from $3,000 to $200,000 depending on its length, complexity, and other factors.

Brenda Myers, president and CEO of Hamilton County Tourism, told CRC she is offering $100,000 in her organization’s 2023 budget to fund the creation of the first show. The HCT budget is due in November, and Myers said board members responded optimistically to his offer to partner with CRC on the project.

“We sincerely believe it’s in our wheelhouse,” Myers said. “It’s exactly the kind of activity that makes sense to us.”

Myers said data collected by HCT shows that from January through March, the county typically experiences a drop in visitor numbers, and nighttime activities that can be experienced spontaneously are lacking in the area. She said a light show could boost tourism in both regions.

Jeff Worrell, a city councilor who is also a CRC member, said he was “skeptical” when he first heard of plans to put on a light show at the Palladium, but that it should boost Carmel’s tourism – and therefore local businesses – and other factors convinced him to vote in favor of the plan.

“We debated (light shows) to the point of nausea at council level when we were considering putting it on the water tower, and I voted for it. I believed in this project,” Worrell said. “Now we almost have our cake and eat it too.”